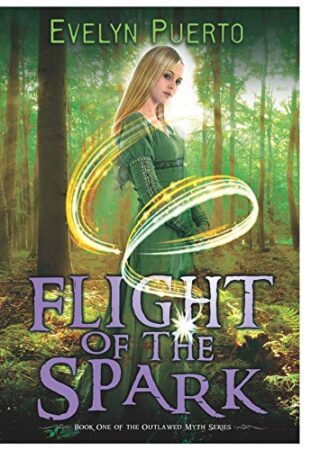 Award-winning author Evelyn Puerto has given us a gift: Flight of the Spark Book One of the Outlawed Myth Fantasy Series. Like many authors, she spent years writing her first novel, but as you’ll see below, those years were well spent.

A lover of borscht and liberty, Puerto presumably also loves her psychotic cat.

My Thoughts on Flight of the Spark

Most fantasy takes a few chapters for me to settle into as I get used to the world the author creates and work to pronounce the names of the characters (perhaps the one thing I’d change about the genre). Flight of the Spark starts with Iskra, the main character, traveling from her little village of Gishin to Shinroo with a friend and the traders. Because Puerto took the time to introduce the world in a way I could process as I read, the story of this 15-year-old traveling a dangerous path wasn’t hard to grasp. It opened up my ability to savor the story without worry of forgetting some worldly law.

At first, I expected my review to discuss how Flight of the Spark shows the vast differences between communism and capitalism. People burdened by the laws forced on them in the name of safety, and the people who soar because few laws keep them from their dreams–aka the riskers.

But the more I read, the more I realized that while the story does have similarities to communism with leaders who live lavish lives while commoners live in cookie-cutter hovels, it focuses more on one emotion everyone experiences: fear. The villagers surrounding Iskra may be burdened by laws and aspects of communism, but fear keeps them in bondage.

Fear kept Iskra in bondage. Then Xico, a risker, saves her from a bandit, and a new world opens up to her. With that new world fear crashes down, and she has to decide what matters most in life.

The story, alone, intrigued and later amazed me, but the writing and characterization reaches levels every author wishes to attain. The years Puerto spent perfecting this novel shines through, brightening her talent for all to see.

Iskra doesn’t question the rules. The rules are there to keep her safe from those who are deemed unsafe or unfair. Anyone who breaks the rules is taken, never to be heard from again. But that’s the price everyone gladly pays for peace and safety. And no one wants to live like the Riskers–barbarians who reject order and justice, and could kill or be killed at any moment.

When a friend is taken because of Iskra, the guilt forces her to do the unthinkable: seek out the Riskers. Iskra’s quest to save her friend quickly entangles her fate with a cryptic prophecy and a young Risker named Xico, who ensnares her heart and is willing to put it all on the line to win her.

With every risk Iskra takes, the closer she gets to true freedom. But every choice carries a consequence. The choices she makes set events she never imagined into motion, and the price of her freedom could very well be her life and the life of the man she loves.

Purchase your copy of Flight of the Spark on Amazon

One thought on “Book Review Flight of the Spark”