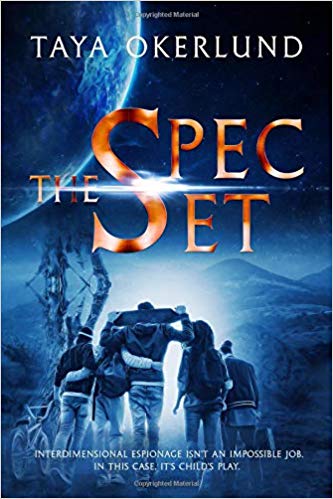 Spending several weeks of his summer at a geeky science camp while babysitting his odd younger brother isn’t the highlighted path E wants to travel. Then, to top it all off, paths surround him as he and his brother become the focus of the FBI in The Spect Set.

Taya Okerlund creates a remarkable story that follows two brothers on the unexpected adventure of their lives. And though Max, the younger brother, knows of his talents, Emile (E) is just discovering his. A fun YA story filled with excitement, The Spec Set is one I enjoyed reading.

My Thoughts on the Spec Set:

Told through the eyes of Emile, the Spec Set brings the fun vernacular of a teenage boy burdened by too much responsibility for a younger sibling. What makes it worse? Max doesn’t speak. On the rare occasion he does, the single word response hardly covers the required answer. Though watching his brother at science camp isn’t an idea E likes, he still stands up for him regularly. Luckily, Lilly, the latest pain in his side, likes Max and helps out as much as she can. Eventually, when E’s own reality seems to explode, Lilly and Max let him in on a little secret, and he meets the rest of the Spec Set.

I quite enjoyed reading this fun story. Much of Max’s characteristics are obviously written in a way that leads the reader to believe he has Autism with selective mutism. Having a child of my own with Autism, I found the writing well-done. In fact, the story follows kids with conditions who have developed superpowers. The story states clearly they are not savants, but, wow, do they have talents!

So often, incredible children with neuro-diversities are left by the wayside, uncelebrated despite their amazing talents and qualities. The Spec Set may be science fiction but the preface behind it isn’t.

The book could use a good proofread. There are several instances of simple mistakes, usually out of place or incorrect words. It did affect my attention to a degree, and I would preface this point before handing it to my children to read. The story is squeaky clean and perfect for both boys and girls of any age, though readability probably begins with middle graders.

Copernicus Science camp looks harmless enough on the surface, at least no one will tell you otherwise, least of all Max McKenzie, who doesn’t speak at all. He can’t even defend himself when he’s implicated in a high stakes chemical theft from the camp lab. Or can he?

His brother Emile is desperate to help, but he’s waking up to his own problems–chief among them the fact that he’s developed an incredible (and incredibly dangerous) new ability. He doesn’t know how to control his awesome new power, and turns to the one person he’s loathe to ask: Lilly Fang.

Lilly has everything under control, including other people’s biochemistry. (Or is Emile really that crazy about her?) Either way, she’s hiding a boat-load of secrets (and secret powers).

Lilly assembles a team of friends like none Emile’s ever dreamed of to help Max.

There’s Fetu, a near giant, whose presence alone seems to suck the air out of the room. Or does he do that literally?

And Danika, who’s so shy she seems to fade right into the background. Or does she actually become invisible?

And Eliza, who never lifts a finger–but is that because she lifts things with her mind?

The Spec Set will need all of their combined strengths (and their weaknesses) to combat a threat reaching all the way go to another universe.