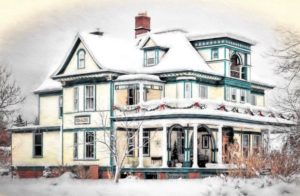 Chamomile and peppermint laced the air as it floated on the steam of Rebecca’s tea. The porcelain cup warmed her hands, and she brought the first sip to her lips. Tension from her mind and muscles relaxed. It always did. That’s why tea time meant so much. Childhood had brought moments of happiness, but she lived a lonely life in a too-big, drafty house as an adult. Another sip passed her lips, and she closed her eyes, savoring the combination of earth and spice. Maybe one day she’d find the money to move. She snorted. Old age had come long ago. And not all big houses come with rich people. The worn interior, only slightly better than the exterior, still held the rugs and furnishings of her childhood. The wooden floor, long ago scuffed, lost its shine, and when she walked carelessly, the old planks poked her with slivers.

Finishing her evening tea, she peeked through the living room curtains at the dimming street. Winter had come, but no snow. Good. Snow meant shoveling. The rusted wrought-iron fence stood between her and the rest of society—a jailer or a friend—she wasn’t sure which. The plants had long overgrown their planters. Brown from the cold, they twisted together in a kind of brambled thicket. For years, Rebecca kept the family garden until her knees no longer lowered her to the ground. She had loved the feel of the moist dirt between her fingers and the fragrance of newly planted flowers.

Sighing, she dropped the curtain and clutched the rickety banister, then started toward her room. Other than meals and tea, that’s where she spent her time. No phone. No entertainment. Just her, the bed, an old rocker, and an occasional book. Most of the time she didn’t bother with the book. Pulling the covers tight, she closed her eyes. Groceries would be delivered tomorrow.

The next morning, Rebecca waited for the delivery. The boy was never timely like his father had been. She glanced out the window. Dragging her weak legs to the front door, she swung it wide. “Where?”

Her feet shuffled onto the covered porch where several slats were missing, but that wasn’t new. They’d been gone for years. Gently grasping the stair railing, she eased her weight against it and lowered herself to the walkway. A branch whacked her back after she’d pushed it out of the way, but she ignored it.

Reaching the edge of the yard, she gasped. Her wrought-iron fence hadn’t fallen over. It had disappeared. “Where did it go?”

Rick’s car parked in front of Rebecca, and she waited for him to get out.

“Hi, Miss Rebecca, enjoying the brisk morning, are you?”

“My fence is missing.”

“Let me carry your groceries in for you.”

“Have you seen my fence?”

“Can’t say I have. Did you have someone remove it?”

Rick laughed. “Consider it a work of God. Would’ve fallen over with the next wind, I bet.”

Rebecca shuffled back inside and paid Rick. He was probably right.

Throughout the day, clouds rolled in and the sky darkened. After taking tea early, she added a blanket to her bed and climbed in. Any time she might have spent outside ended. She’d rather enjoyed her walk through the brisk air that morning, but no more.

When the sun rose, she peeked through her worn curtains. Snow covered her yard everywhere but the walkways. Not a single overgrown branch hung over the concrete either. The cold air glanced across her cheeks as she opened the door. Hobbling onto the porch, she discovered the missing slats replaced. God might blow away fences and snow, and she supposed Jesus was raised by a carpenter. But did he garden too? The brambled thicket now lived as a clean, cared for yard, covered by fresh, crisp snow.

Hurrying back inside, she opened all her cupboards. Flour, sugar, butter. Did she have any chocolate chips? The stool dipped in the middle, and she clung to the pantry shelving. Three bags of chocolate chips scooted toward the edge. She brushed the dust from the bags and opened them, the aroma of chocolate rising into the air.

Ingredients combined in a bowl as she made three batches of chocolate chip cookies. Rebecca mixed while wondering if her neighbors had tired of her unkempt home. If they had, she’d pay them somehow. Without money, that meant food, and her chocolate chip cookies beat everyone else’s. She knew, whoever the elves were, they worked for themselves and not for her. She had no friends—hadn’t since childhood. That wouldn’t stop her from saying thank you.

That night, Rebecca could hardly sleep. Dressed in her robe and slippers, she snuck downstairs and perched on the sofa where she could see out the living room window. She felt like a child searching for Santa on Christmas Eve, but Christmas was still two days away. Sliding her finger between the curtains, she peered outside. Nothing had changed, but it was still early. She covered herself with the knotted afghan spread across the back of the sofa and continued checking outside late into the night. Each time, her excitement diminished just a little, until her eyes grew too heavy.

The next morning, she woke up and shot to her feet as quickly as an old woman could. Peering through the curtain, she saw nothing. Had her elves finished their work? Her feet hurried across the floor and to the door. No animal would feast on her chocolate chip cookies. She inched outside to the table where she’d set the treats. But the plates were empty. Not a single crumb remained. The elves must have enjoyed their payment. Grabbing the plates, she rushed back toward the house, tears burning her eyes. She had so hoped, but without reason. Silly old woman.

She stopped and stared at the front door, then dropped her eyes to the porch. Slowly, she scanned the front of the house. There was no bare or rotting wood. No chipped paint covered the eaves or the siding. Instead, fresh paint coated every inch of her home. A bright white. Her door, once brown, now swayed in the breeze, a bright red. And from it hung a beautiful Christmas wreath.

Her shoulders lifted. The elves had come. This time they seemed more like angels. Only angels could paint a house overnight.

Rebecca needed to thank her angels somehow. But how? She donned her best everyday dress and grabbed her purse. Frigid air met her as she teetered down her cleared walkway and onto the sidewalk. The store wasn’t that far. With the outside of her home fresh and clean, the angels had no work left to do. Cookies wouldn’t be enough. She hoped Rick would help her. Once in the store, she gazed at the Christmas decor. Choosing two strands of lights and a set of inexpensive ornaments, she stepped to the counter.

“Miss Rebecca, how nice to see you,” Rick said.

The corners of her mouth lifted. “Rick, I need your help.”

Rick didn’t make a peep as she explained her needs.

Rebecca nodded and began to say goodbye when Rick took her by the arm and walked her to another part of the store.

“Miss Rebecca, it’s cold out there, and it might snow again. You come rest in our coffee shop with a nice cup of tea, and I’ll take you home when my shift ends. Would you like to read a book?”

She wanted to get home and work on her gift to her angels, but without Rick, there wasn’t much she could do. And the chair did look nice, so did the Christmas story he handed her. She shuffled to the chair and sat down in time for a young woman to hand her a wonderful cup of chamomile peppermint tea.

It seemed like minutes later that Rick patted her arm. “Miss Rebecca, my shift ended. Shall we go?”

He helped her from the chair and led her to his car. “So you want me to hang lights?”

At the house, Rick curled and twisted the lights into the pattern Rebecca requested. She carefully stepped through the snow and hung ornaments from the lower branches of her recently trimmed trees. Though not as visible at night, they would brighten her yard during the day. When finished, she and Rick stepped back to the sidewalk. Tiny dots of light spelled out two simple words: thank you. And though Rebecca never expected the ornaments to shine at night, they reflected the Christmas lights of the neighborhood enough that the snow below them sparkled.

Rick walked her to the door, and she heard a scuttling sound from inside. “I may need you a minute longer, young man. Something is in my house.”

A new gleam in his eye sparkled, but he nodded, ready. “I’m here, Miss Rebecca.”

Before she could grasp the doorknob, the door swung open.

“Who…” Rebecca’s words dropped from her lips.

Hands guided her into her home where shouts of Merry Christmas floated to her ears. The wood floors shined again, and the furnishings were clean, some new. The banister and stairs looked new too. A large Christmas tree graced the center of her living room, and people stood everywhere. “Is this the whole town?”

Laughter rang through the room.

“Your thank you isn’t big enough, but it’s hanging outside.” Rebecca’s heart warmed, overwhelmed by the love shown to her.

She slid onto a chair, and a gentleman stepped forward, twisting a hat in front of him. As she acknowledged him, he dropped his gaze. “I have your fence at my shop, Miss Rebecca. I’m sorry I didn’t finish it in time. All the rust is gone, and I can bring it tomorrow if you’d like.”

She searched the faces of the people in her home, each one smiling bigger than the next, then rested her eyes on him again. “I think I’m done with fences. I recently discovered a whole town of angels, and I’d like to be a part of it.”