Sarah daydreams about the Resurrected Christ and the multitude and discovers her own miracle. 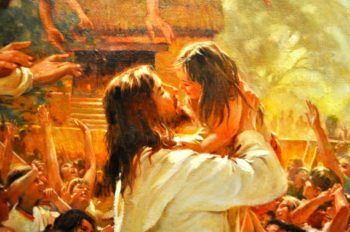 Sarah, holding her mother’s hand, stared at the marble Christus. The hands spread wide, welcoming her closer, the facial expression gentle. Her tight curls bounced across her head as she leaned back and gazed at the large statue. She wondered at the shiny white surface. Sunday school stories of Jesus calling for the children, children like her, sowed a simple peace in her heart. Her mother squeezed her hand.

“I’m going to look at the pictures on that wall. Stay in this room.”

Sarah nodded, resting her hands at her side, careful not to touch the velvet rope that separated her from the Christ. Her focus landed on the soft hands, where carved marks of the nails rested, then to his feet and side. Her heart thrummed in her chest, soft but apparent, as she wondered what it was like for Thomas to feel the nail prints in his hands and the sword print in his side.

As she focused on the statue’s palm, the marble appeared to change, white darkened, a warm golden tone taking its place. Sarah’s eyes widened, but recognizing the signs of a daydream, she remained in place.

Seconds later, she discovered herself surrounded by people. Children rested on fathers’ shoulders. Babes cooed in mothers’ arms. Clothing of every color blurred as it pushed past her, yet happiness and peace filled her soul. Those around her fell to their knees, heads bowed. But she remained, staring into the soft eyes.

With his finger and a wink, he motioned Sarah toward him. Her slippered feet carried her closer. His strong arms ensconced her, bringing her face to his eye level. He smiled. After the gentle hug, he held his hand in front of her, and she reached her fingers toward it. Pulling back slightly, she eyed him from the side.

The mark swallowed her finger as she lightly caressed it. The softness of the skin nothing like the hardness of the nails that had pierced it.

“You could have stopped it, saved yourself?”

He nodded, a twinkle in his eye.

He leaned toward her ear and whispered more. A smile rushed across her face, and she wrapped her arms around his neck before he placed her back on the ground. Moments later, she joined the crowd, the cool ground contrasting the warm feeling coursing through her.

The Savior called for the people to come forward, and Sarah watched as, one by one, men and women, the young and old got to their feet and stepped forward. A warm smile and welcoming arms greeted each one as they received the personal time they desired with the Savior, just as she had. Their fingers touched his hands, feet, and side. Some women cried as they kissed his feet, wiping away tears with the hems of dresses. Men unabashedly wept as they embraced him.

Time passed slowly, but children never fought and babes never cried. Adults talked of miracles and knelt in prayer. No one pushed or shoved to the front. Patience and love intervened, the procession one of reverence.

When the last returned, the Savior called the sick, disabled, and those otherwise in need of healing. The man standing next to her lifted a woman in his arms and carried her forward. Standing with his arms outstretched, Jesus motioned all the afflicted forward.

Pebbles poked at her knees as Sarah knelt on the ground, and she brushed them away. She suffered no ill but thought of her father, who lay in a hospital room ravaged by cancer. Even as young as she was, she knew the harsh treatment he received left him weak for days at a time. Just as he felt a little strength return, it was always time for another round. Prayer after prayer had been said on his behalf. Her mother wept every night for his relief. For her own, too. Tears came to her eyes as she watched the Savior lay his hands on the afflicted, healing them one by one.

As the last of the afflicted leaped from his bed, Jesus instructed the people to pray. Together, they bowed their heads and lifted their voices as he knelt a distance away.

“Hosanna, blessed be the name of the Most High God,” cried the people.

When the Savior returned, warmth from her heart rippled through her arms as he spoke to the crowd. The day had passed, and the people still focused on him, but their eyes appeared tired, and their shoulders drooped with similar strains. Tears filled his eyes as he scanned their faces.

No one moved. Sarah’s own heartbeat strengthened. She didn’t want to leave either. It couldn’t be time.

Brushing a tear from his eye, Jesus called for the little children. Parents carrying babies and holding the hands of their little ones helped them forward. Boys and girls sat on his lap, and he held a babe in each arm. Sarah’s lip quivered when he called her to join the others.

As she stepped forward, a bright light opened above him. People dressed in white, as beautiful as the Savior, surrounded the children, blessing them. One took her by the hand and walked with her.

“Child, you do not have a wish for yourself, do you?”

“But Jesus whispered to you. What did he say?”

“Not to worry. That everything would be okay.”

“Have you been worrying?”

“Do you know who Jesus is?”

“Can you tell me what he did for you?”

“He helps my sins go away, and he died for me so I can return to Heavenly Father.”

“Do you think he can heal your daddy?”

Sarah bowed her head and studied her feet.

The angel squeezed her hand, then lifted her chin, encouraging her to answer.

“If it’s the best thing he can. Mama says it depends on God’s will.”

The daydream faded at the sound of her mother’s voice.

One more glance at the Christus in front of her and Sarah hurried to her mother.

“Where are we going?”

“To the hospital. Daddy had a scan today, and he wants us to hear the results with him.”

“The scan tells us whether or not the cancer is gone.”

She tugged on her mother’s arm, trying to run faster. “It is. It’s gone.”

Her mother pulled her back and crouched beside her. “We don’t know that Sarah. Most of the scans haven’t been great.”

“I hope you’re right, but if you’re not, it’s okay. God will take care of us and Daddy.”

Biting her lip, her mother rose from the ground and clasped Sarah’s hand. Tears floated in her eyes.

The quick drive to the hospital soon delivered Sarah and her mother, and they hurried to her father’s room.

“Where’s the doctor?” Sarah eased onto the foot of the bed with her mom’s help and stared at her dad.

She turned in time to see the doctor walk into the room.

The doctor raised a brow, then quickly furrowed them. “Well. Let’s take a look. The last scan showed an increase, correct?”

Her parents both nodded.

A picture of her dad’s insides appeared on a lighted board, and the doctor pointed here and there, talking to her parents. Their faces crumpled, and Sarah stared from one to the other.

“He’s better, right?” A little butterfly entered her belly even though she’d been so sure.

Arms wrapped around her as her mother picked her up and swung her in a circle. “He’s better!”

She eyed her daddy. “You feel better, right?”

The room broke out with laughter.

“No, pretty, I don’t feel better yet. Cancer and my treatments hurt me a lot, but the doctor says my cancer has gone away.”

Lifting her to stand next to her dad, Sarah’s mother met her gaze. “How did you know?”

“Jesus told me not to worry.”

Her father poked her side, and she giggled.

“When did he tell you that?” her mother asked.

Sarah looked at her. “Today, at his statue.”

Tears swept into her mother’s eyes. “She stood by the Christus the whole time.”

“What else did Jesus say?” her father asked.