When Red finds herself no longer able to qualify for rock-climbing competitions, she returns home, defeated, to the ballet. 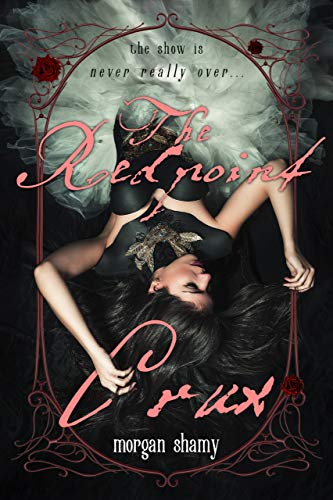 Morgan Shamy’s personal knowledge of ballet and piano along with her husband’s gold-medal expertise in rock climbing makes her uniquely qualified to write the Redpoint Crux, where the three skills are woven together in a retelling of the novel Phantom of the Opera and the ballet Giselle.

My Thoughts on The Redpoint Crux

After reading the description of this particular book, I wondered if it could be a retelling of the Phantom of the Opera. A few phrases stood out, making me think it might be. These included: “A series of murders” and “a tortured young man who lives beneath the depth of the theater.”

The first chapter of the Redpoint Crux takes place in the mountains where the main character, Red, finds herself in quite a predicament… dying after falling from a cliff. An older sensation, similar to being whisked back in time, opens the next scene as readers are introduced to the theater and its new owner, Liam.

Most of the story takes place in the theater, which is located in Halifax, Canada.

Being a person who enjoyed the Phantom of the Opera novel by Gaston Leroux, my mind started making connections. I found Christine, Raoul, Meg, Carlotta, Madame Giry, a few other characters, and obviously, the phantom within this new novel. Throughout the story, other similarities came into view, a mirror with a hidden passage leading into a private room, a chandelier scene, a music box, a torture room of sorts, a violin at a funeral… a noose.

Of course, the story line caught my attention, too. But as I continued reading, the Redpoint Crux diverted from the Phantom of the Opera. Some characters changed. becoming different than they first appeared. Other mysteries popped up–mysteries I now recognize as similar to the story told throughout the ballet Giselle. Ghost-like ballerinas, a mentally-tortured character, a hero, and a love story that I hope isn’t over.

The difference between the chapters that take place at the theater and the chapters that take place away from it is fairly stark. Candles and behaviors similar to those found in the late 19th to early 20th-centuries with tutus and pressed suits (except for the main character, who misses rock climbing and wears casual clothes) fill the pages surrounding the theater. Modern technology and speech patterns cover the pages of the scenes away from the theater. These differences work well together throughout the story, and combine toward the end when Red must make a choice.

As I discovered similarities between the Redpoint Crux and the Phantom of the Opera, I worried they were too alike. I worried because the author’s description doesn’t mention a retelling. But in the end, I enjoyed The Redpoint Crux. Morgan Shamy writes well. She does a great job setting up a scene and making your heart race at the right moments. The ending of her novel surprised me some, and I hope there is a sequel planned. I still have questions that a character promised to reveal answers to. And they haven’t been answered yet. So, don’t take too long, Morgan; I’ll be waiting.

I do suggest the author mention her story is a retelling in the description. That way people familiar with the other stories (especially the well-known Phantom of the Opera) know to expect that. However, the fact that it is a retelling shouldn’t stop anyone from reading the Redpoint Crux. The differences are enough to make it time-worthy.

When Megan Van Helsburg gets kicked off the U.S.A. Climbing Team, she has no choice but to return home and leave her climbing career behind. With no coach, no money, and no prospects, she joins the corps de ballet determined to improve her strength and agility. But the ballet theater is in dire straits. Not only do a series of murders break loose, but the ballerinas are becoming deathly thin and brain-dead. As Megan investigates, she meets Bellamy, a tortured young man who lives beneath the depths of the theater. Megan falls hard and fast for Bellamy, who becomes her mentor, but something is off about him.

It isn’t until the company announces they’re doing Giselle for the fall performance that Megan realizes the parallels between the ghost story and the lives around her. Megan must find a way to not only save her climbing career, but balance her feelings for Bellamy, and stop the murders and dying girls before she, too, is numbered among the dead.

Pre-order your copy of The Redpoint Crux on Amazon