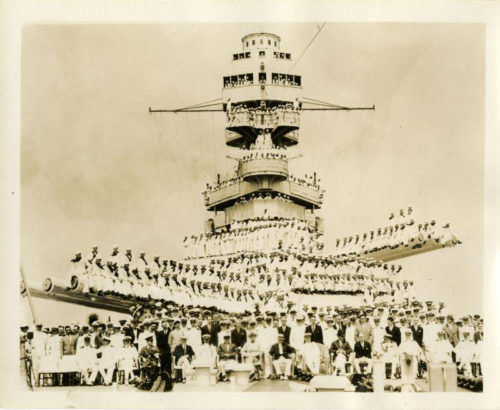 John climbed from below to the deck of the USS Arizona still drowsy from the night ashore Oahu with his twin brother, Jake. Being assigned to the same battleship made his time in the service more endurable. The two had enlisted together, and although they hadn’t always served on the same ship, a sailor on the Ellet had provided the means for John to return to the Arizona a year ago.

The sun pelted John’s eyes with light, and he squinted as they adjusted to the open sky. After strolling to the fantail deck, he pushed a broom over the wooden planks, his mind filled with memories of his night on the town. A dull scratching reached his ears as a vibration buzzed at his hands. Pausing, he bent down and pocketed the small screw picked up by the straw bristles. He always found something.

Glancing up, John casually waved to the burly sailor who nodded as he strolled past, probably on his way to the mess hall.

Grabbing chairs, John’s crew quickly worked to set up for church services. His stomach growled at the thought of breakfast, and he looked forward to eating his scrambled eggs and ham next to his brother. Luckily, with enough people, setting up chairs took little time.

Moments later, a few beads of sweat formed on John’s brow from the humidity gathered in the mess hall. Maybe he could snag a table near a fan. Either way, his tray, overflowing with eggs, ham, and hash browns, called to him, and his stomach growling again as he searched the room for his brother. Perhaps Jake was running late.

As John approached a table, the sky rumbled, and apprehensive sailors jumped toward tiny windows, pointing and yelling about smoke from Ford Island darkening the sky.

John’s heart lurched into his throat.

Planes with painted red balls on the underside of gray wings buzzed in the sky. He cursed. “The Japs are attacking!”

Dashing past the men not yet to their feet, he ran through the hatch, flinging his hand into the alarm button. Before the shrill wailing had a chance to sound, an explosive crack broke, throwing him to the floor.

Ignoring the pain now pounding in his head, elbows, and tailbone, John laid hand over fist and climbed up the ladder, rushing to his station at gun turret four. An explosive cacophony rang through the sky as the USS West Virginia, berthed next door, sank—the men who hadn’t died now swimming toward the safety of Ford Island. Black smoke from the Nevada also stained the horizon on the other side of the Arizona.

Grasping for a single formed thought, horror banded John’s chest as a bomb struck the gun turret where he stood then careened below deck before exploding into flames.

John bolted for his turret captain yelling, “We can’t just watch this, we have to do something!” He grabbed his captain’s arm. “My brother’s on the anti-aircraft batteries. They need help, and I know what to do!”

His captain waved him off, granting permission.

Mayhem shot through the ship as two more bombs struck the USS Arizona on the port side. How was she still floating? No signs of anti-aircraft fire lit the charred sky. Nothing.

A wall of hot air struck John in the chest, deflating his lungs and stealing his voice as he rose into the air and then plummeted to the deck thirty feet away. His body flailed on the marred planks he’d swept only minutes before.

Crawling to his knees, another blast sent a scorching orange and black cloud into the sky. Wooden planks scratched at John’s legs as he slid across the deck. A fourth bomb had exploded the battleship’s store of gunpowder, thrusting the ship into the air.

Tears, oiled with soot, trailed down his face as he ran back to the gun turret. Commander Fuqua swung a dripping water hose through the air as he attempted to extinguish the flames surrounding himself and other men. The injured fell to the deck in front of John, their odorous skin sluffing to the ground.

Fuqua screamed the order, and John twisted in confusion until his gaze landed on the captain’s gig. Hoisting the closest man over his shoulder, he worked to control his own shaking.

One after another, John helped men onto the boat. Each of the faces seared into his mind. And though he could no longer recognize most of them, he knew none of them were Jake.

“Abandon ship! Get off this ship!” Fuqua called, but John ignored him. “Do you hear me, sailor? Now!”

John shook his head and threw his shoulders back. “I’m not going. My brother’s on this ship.”

“You’ll go now!” Fuqua shoved John and the man he carried onto the boat. “Now!”

Trying to fight the strength of the acting captain quickly became impossible, the weight of the other sailor heavy on his shoulders. John slumped down to the floor of the boat, his chest heaving as he held back tears.

He no longer attempted to lift his gaze to the sky. The once beautiful, sunny day now oozed with nightmares. Thoughts of his brother rammed his skull. The walking corpses around him proof of what he might find. But he had to search. He had to go back. He couldn’t leave Jake.

Dropped off at Ford Island, John stumbled to a bunker where other unfortunate survivors stood. They watched the Arizona as it burned, black clouds hiding the ship itself from view. Smaller boats floated through the attack, attempting to rescue men from the water. Other, less fortunate men, swam the distance to shore. Some stepped straight from the USS Arizona into the water that lapped at their scorched toes.

John formed fists, his broken and grimy fingernails still able to pierce his skin as his knuckles whitened. “I’m going back.”

He whispered the words at first, his throat raspy from smoke inhalation. Then he raised his head, meeting the eyes of the one willing to meet his. “I’m going back!”

The words exited his lips with force. The burly sailor who’d passed him on the deck stared back at him. A boatswain.

The tall man, with formed muscles under his burned uniform nodded. “Yeah.”

They didn’t bother to shake hands, choosing to walk toward the fight instead.

“Boatswain?” John eyed Chet from the side.

“Four for me. You have someone back home?

Chet lifted his head, scanning the destruction before them. “Wife and baby girl.”

“How’d you get ashore?” he finally asked.

Seeing an adrift boat near the incapacitated USS Nevada, John and Chet entered the water. Once so inviting, it now burned John’s skin as much as the flames. Debris and bodies filled the waves and shoreline around him. He focused on rescuing his brother.

As the men reached the abandoned dinghy, they lifted their arms from the water. With slicks of oil sticking to each limb, both climbed on board.

Splintered planks knocked against the side of the boat as they steered toward the Arizona. Billows of smoke covered what remained of the deck, obscuring their view of survivors. John watched the water for survivors, but none surfaced.

As John met Chet’s eyes, the man looked away. Turning, John focused on where the man had been gazing. The main mast and tower—and Jake’s station—were gone, tilted in a mass of flame. At least Chet hadn’t tried to deter him.

The tiny boat skidded against the rear of the sinking ship, its deck beginning to submerge.

“I’ll wait so we can leave fast.” Chester looped a rope to a groaning scrap of metal. “Make it quick.”

Jumping out of the skiff, John stepped onto the abandoned deck. Nothing but noxious, black fog, curled by the rising heat, moved. As he gazed toward the mast, his body shook. He knew. Jake was gone.

Dashing through the fog, he searched the rear of the Arizona until he came across three sailors struggling to breathe—struggling to move. Their charred skin sluffed from burned backs. One by one, he carried them back to Chet, who helped load them in the dinghy and pushed off the second John climbed aboard.

The three rescued men lay coughing and lethargic. Unable to scream away their pain. John saw it in their eyes and in the stunted rise and fall of their chests. He moved toward Chet.

“We got to get outta here.”

The words left his mouth in time with the buzz of aircraft.

Gunfire rained around them, Hospital Point visible, but so distant. The ruins of the sunken West Virginia and the capsized Oklahoma were now dwarfed by the flames jumping from the other ships and the oil-slicked harbor.

The racket around them still couldn’t cover the crackling of their craft as it exploded. Coughing out the water and oil he’d swallowed, John frantically writhed in the thick liquid as he searched for the others. Minutes passed, gunfire continued, his body tired. Nothing but debris surrounded him. They were gone. Chester was gone.

Stroke after agonizing stroke, he swam toward Ford Island. The sky, basted in black, gave no sign of the time. Finally, he pulled himself to shore, oil covering his body. An abandoned rifle with two bandoliers of ammunition appeared to wait for him near a tree.

They’d taken his brother, his friends…Chester. Diving into a crater formed during the raid, he hunkered down, ready to take any Jap that came his direction.

The next day, as accounts came in, John learned that the USS Arizona had been hit by four bombs in fourteen minutes. By the end of those fourteen minutes, much of the Pacific battleship fleet burned in unglorified flames.

The U.S. entered the war and John fought. He fought for his brother and for Chet and for the others that were lost, but most of all, he fought because it was his job.

2 thoughts on “The Boatswains”