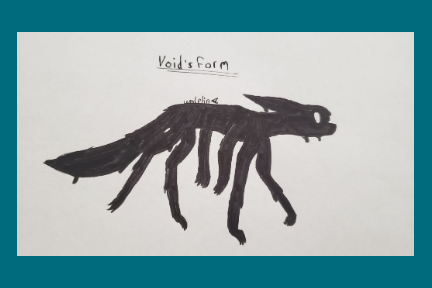 My daughter, who would like to be called Void, and I are excited to bring you regular installments of her fantasy short-snippet series Immortals and Men. Void attends an online school and is a freshman in high school. She enjoys reading and writing fan fiction as well as creating her own fantasy worlds. Please enjoy the first installment of Immortals and Men, The Void Wakes Up.

The Void Wakes Up

The sludge was impossibly old. Compared to the others, however, it was hardly an infant. It was the only one of the others to have no solid form. As such, the sludge remained unseen and undiscovered by the life that roamed above the hidden cave.

After lying dormant for so long, it was restless. The viscous liquid that made up its current form rippled as a nonexistent wind stirred the surface.

The eerie black fluid sloshed silently in the deep and well-worn lake before a large glob broke off from the whole. The inky substance defied all logic as it sluggishly trickled up and into a separate indentation.

The hole deepened as the sludge pulled in the rocks around itself, following its nature–to consume, destroy, and make everything vanish.

The thick liquid began to change, surging upwards and taking on an animalistic appearance. Newly solid, it stood and opened its bright eyes, casting its gaze around the pitch-black cave. Lifting its head, it stared at the rocks above, dripping the dark substance.

A roar tore from its new form, reverberating through the rock and to the world above. Instead of making sounds, all were silenced. The hum of bugs, the song of the wind through the trees, even the constant thrum of heartbeats vanished.

And the world knew.

The Void was awake.

Watch for more of the short-snippets series Immortals and Men on KameoMonson.com