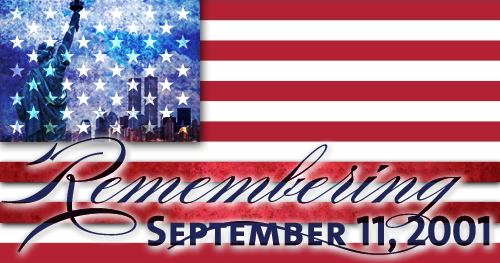 Each year, I think about that September morning when I climbed out of bed, turned on the TV, and realized American lives had changed forever.

I called my husband in the other room about a plane crashing into the Pentagon. Seconds later, tears rose in my eyes as we discovered the truth. Terrorists.

I’d grown up hearing the word in movies. In school, toward the end of the Cold War, teachers talked about protecting freedoms. I watched the wall come down while sitting in my freshman typing class.

But this attack, driven by hate, was different. It was on our soil. And, unlike Pearl Harbor, individuals, not an invading nation, carried it out.

As thousands of people died, everyday men and women became heroes. The skies quieted to an eerie silence, while we cried and mourned with our neighbors and communities. We prayed. For months, flags waved from houses and businesses, symbols of love for those who died and for our country. Americans were unified.

We became stronger as we put aside our political and religious discord, exchanging it for unity with our fellow Americans. No one concerned themselves with black or white, Christian or atheist. We were unified as we vowed to never forget.

For me, it was more than remembering the heroes that rushed into collapsing buildings or brought down a plane before it reached its intended target. I determined to remember the grief I shared with strangers in the supermarket, and the solace we found in each other’s eyes and words, to remember the thousands of memorial services offered throughout the nation so no one had to grieve alone. I determined to value unity.

Today, I am reminded of a story of a king and his usurper whose kingdom was divided by discordant citizens who couldn’t agree. “We must worship the sun,” one would say.

“No, the earth gives to us more bounteously,” argued the other.

As swords slashed at each other, the king and his usurper climbed a tower. With a blade at his throat, the king cried out, “Stop, we are under attack!”

The usurper turns to find a neighboring nation taking advantage of their kingdom’s division. Running from the tower together, yet separately, they turn toward their shared enemy. The clashing swords of the citizens, exhausted from battling each other, failed.

Did they fail during the invasion, or did they fail by refusing to find common ground in the first place?

For the past eighteen years, I’ve considered 9-11. I won’t forget. I won’t forget the heroes, the fallen, or how Americans came together in unity—a unity we must find again and strive to keep. Our discord and division deepen with each passing year. But those heroes became heroes by setting aside their differences.

The word unity often appears in 9-11 messages. We do remember, and we can never forget. But what will we do with that memory?