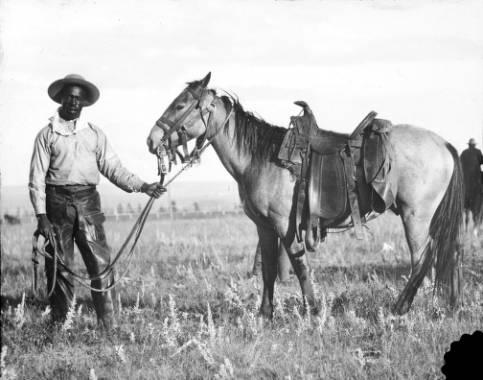 “Have you ever seen one?”

“No. He looks like a Mexican with a tan,” my friend John said. “Do you think he can see his hand in the dark?”

I whopped him on the head. “Can you see your hand in the dark? Course not.”

When Pa told me he hired a new ranch hand, I’d shrugged my shoulders and stuffed another bite of rice and beans in my mouth, a few grains falling back to my plate. He made mention of remembering my niceties, and I nodded while shoveling in more food. Never once did he mention the cowboy had skin dark as night. So when John and I set out to play kick the can with some of the others, we hid behind the tool shed the second we saw the new hand.

John and I’d seen plenty of Mexicans, played with a few too. José always won when we played marbles. One day I’d win my aggie back, God willing. But Negroes weren’t too common in our state, and even less common in our corner of the desert.

John yanked me back behind the shed. “We can’t do that. What if he touches us?”

“So, they carry illnesses. You don’t wanna get sick.”

“Pa wouldn’t have hired him if he carried illnesses—not if he’s working with the herd. Come on.”

John picked up an old, half-rotted two by four and skulked behind me. As I approached the new hand, I turned my head and rolled my eyes at my friend, motioning for him to drop the unneeded protection. He shook his head and stood back.

The man tipped his brimmed hat as he continued to stare across the ranch.

“We’ve got lots of . The cows like to hide some. I guess Pa hired you to help bring ‘em in.”

His eyes shifted, looked me up and down, then returned to their original position. “He did.”

“South… Will, you got a friend ready to beat my brains in.”

Matthew swung around, feet sliding in the dirt as he yelled boo. The two by four broke in pieces when John dropped it and ran all the way down the drive faster than a coyote chasing a rabbit. Ebony hands gripped leather-bound knees as the new ranch hand’s entire body shook with laughter.

I squinted and looked into Matthew’s eyes, sunlight haloing his head. “What d’you do that for?”

“John’s no hassler; he’s just never seen someone like you before?”

“How come you’re not scared?” He eyed my blond hair and blue eyes with a raised eyebrow.

“Pa only hires the best.”

“And my midnight tan?” He folded his arms over his chest, a giant bear that relaxed the more we talked.

I reached my hand out toward his arm, “Really?”

He flinched but allowed me to touch his skin. It felt just like mine. “I wish I didn’t burn.”

Matthew stood up and returned to the fence. “Friend’s back.”

Turning around, I viewed John far off, hunkered down under a tree. Puffs of dirt bloomed around my boots as I sped to tell him about Matthew. Under the Mesquite, I bent over to catch my breath as I narrowed my eyes at my friend. “Scaredy-cat.”

John scratched the dirt with his foot, scowling, and shrugged.

“Come on. Matthew’s nice. His skin feels like ours, and he burn in the sun.”

“I wonder what color he bleeds.”

“Am not.” John dropped a can and kicked it.

“About what?” He stopped and glared at me.

“Well, your Pa’s mean. Thinks that about Mexicans too.”

“So, that’s why your Pa can’t keep good hands. They always steal from him because he passes up good people ‘cuz of their skin.”

A towering shadow covered our heads.

We dropped our heads and stared at the dirt. Something in the tone of the voice humbled us both.

“Sorry I scared you back there, John.”

John turned his head away from Matthew.

“Will,” Matthew said, “I don’t like name callin’. Been called too many myself.”

“Saw you kickin’ can, John. You got a good leg.” He held out his hand toward the rusted tin. “Can I see it?”

John picked up the can and held it in his hands.

“He won’t make you sick. I touched him and ain’t sick.” I said, whispering toward my friend’s ear.

Handing the can to Matthew, he watched as the man dropped it back to the ground. “Kids back home like to lift their toes when they kick. Like this.”

The can into the air and landed twice as far as it had for John. Kicking the can high and far wasn’t necessary for the game, but it sure meant something to us boys.

“Wow!” John turned to me. “That puts Tommy’s kick to shame.”

“Can you show me that again?” he asked.

Matthew played a few rounds of kick the can with us before the dinner bell.

We said our farewells to John and walked up to the house together.

Matthew stood still and furrowed his brow. “Will, I wanna thank you.”

My eyes widened. “For what?”

“You reminded me that bigotry is often taught.” He slapped me on the back of my neck, and we started walking again. “John’s a good kid, just been fed a bunch of lies. It’s people like you that help to unravel them fibs.”