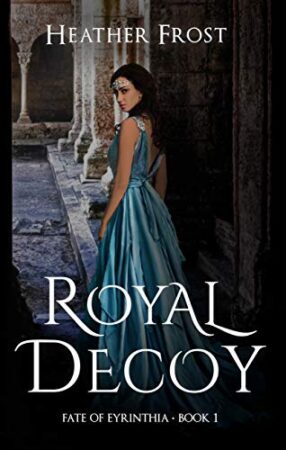 YA author Heather Frost published her first series, the Seers Trilogy with Cedar Fort, but her for her second series, Fate of Eyrinthia, she’s decided to give self-publishing a try. Royal Decoy: Book One brings the action of fantasy and the emotion of romance and entwines them together for a fast-paced adventure everyone can sink their knives into!

My thoughts about Royal Decoy

One of the wonders of fantasy other genres often don’t adopt is multiple story lines with various points of view. The layering effect that takes place brings extra depth to a story, especially with a mystery involved. A mystery such as: Who is attempting to kill the princess?

Royal Decoy includes two paralleling stories in the world of Eyrinthia. Clare becomes the decoy for the brash princess in Davendra. Why? To protect the peace treaty and subsequent marriage between the princess and the prince of Mortise. Prince Grayson of Ryden spends his time doing everything his father, the king, asks, no matter how much he despises it. All to keep seeing the one person who brings him joy–the King’s prisoner, Mia.

Within the first few pages, this book had me hooked. In fact, it was the word hitched that made me swoon. Frost used the word this way: hitched to her feet.

Hitched doesn’t mean stood up. It doesn’t mean rose. But it works! I knew exactly what Frost meant, even though she’d changed the entire definition! I loved the way she used it.

But that isn’t all Frost does well. Her understanding of how the emotion within both fast-paced action and love scenes made me bring my Kindle downstairs–on my birthday–to sit and read Royal Decoy. Keep in mind, I write and read regularly. When I want to relax while reading, I only choose books I’m totally invested in. And I couldn’t wait to see what happened next in this book!

Oh, and I had no idea who the “bad guy” was at the end until Frost divulged the information. The idea of this character being the “bad guy” hadn’t even crossed my mind. But it all made sense. She’d even dropped breadcrumbs. I just hadn’t studied them well enough. THIS IS RARE for me. I almost always guess in advance and correctly. By the time I reached the unveiling, I’d ruled out most of the characters I’d considered, dropped a major breadcrumb, and was totally off.

I can’t label this section okay or bad. It’s nearly an indifference. And after finishing the book, I can’t wait to see how it all works out at the end of the series. But at one point, I thought, oh my goodness, everyone has a plan to destroy someone else!

This isn’t a book with one good side and one bad side. There are multiple groups with their own playbook. And I’m not entirely convinced I’ve run into all of them. This makes it hard to keep track of everyone. But I managed to do it, and I’m certain most readers can as well.

The Official Blurb of Royal Decoy

SERVANT blackmailed into becoming a princess’s decoy.
A BODYGUARD determined to keep her alive.

A PRINCE forced to execute his father’s brutal laws.
A PRISONER used to keep him compliant.

A WORLD on the brink of war.

In one horrible night, Clare goes from kitchen maid to royal decoy. She has three months to become the princess’s perfect double so she can ensure her betrothal to an enemy prince. Desperate to survive, Clare throws herself into self-defense training, taught by her distractingly attractive bodyguard. The danger increases when a ruthless assassin begins stalking her, intent on ending the tenuous peace.

Across the northern mountains, Prince Grayson is his father’s ultimate weapon. He carries out the king’s harsh orders because the one person he cares about is his father’s prisoner. Grayson’s silent obedience is tested when his father plans to exploit the marriage alliance between two of their greatest enemies. If Grayson submits, the blood of thousands will spill. If he resists, the girl who means everything to him will die.

Purchase your copy of Royal Decoy on Amazon.