Based on real events Goodbye, Nauvoo by Marie Woodward tells the story of three women who battle their fears as Latter-day Saints prepare to leave their beloved homes behind. 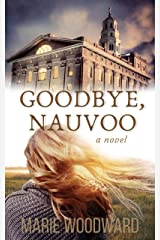 Marie Woodward introduced her first book, Goodbye, Nauvoo, to the public in November 2019. A dramatized history of her pioneer ancestors, Woodward relates the stories of three women who joined the Church of Jesus Christ of Latter-day Saints. These women traveled to Illinois during the height of threatening mobs and before the martyrdom of Joseph Smith Junior in the mid-19th century.

My Thoughts on Goodbye, Nauvoo

As a teenager, I’d walk into my parents’ bedroom and search the shelves for something new to read. Oftentimes, I looked for Latter-day Saint historical fiction. Mom occasionally suggested one of the books on the shelves, and like most genres, I’d digest it quickly.

Those of us with ancestors who lived during the birth of the Restored Church of Jesus Christ often feel closer to them when reading their stories and other stories from their time. Much of our religious knowledge and culture come from that time period.

And our ancestors didn’t simply form a church and worship together. In a country that touts religious freedom, they lived through threatening mobs. Mobs who beat, robbed, and killed many of them before chasing all of them from their homes because of their religion… and the government turned a blind eye.

Being a Latter-day Saint wasn’t easy. Those of us who are their descendants are grateful for the sacrifices they made and the faith they instilled in their children. It provided us with the gift and knowledge of Jesus Christ.

Memories of these feelings surfaced when I discovered Goodbye, Nauvoo, and I chose to read it. Woodward set the story in Nauvoo at a time when the Saints prepared to leave the city for what later became Salt Lake City, Utah.

Goodbye, Nauvoo includes some lesser-known historical facts. It touches on the sentiments after founder Joseph Smith Junior’s murder. And mentions certain groups, such as the Rigdonites, who broke away from the Church after the Prophet’s death. Readers learn of the hardships Saints faced when selling their property as well as how they thronged to the Nauvoo Temple and feared the mobs while holding to their faith.

The book flows well. Woodward did a good job of mirroring one true story with a fictional one–Giving the book a nice lift and creating my favorite part. When she used fiction to fill in the blanks, she chose appropriate-to-the-time situations.

Today’s authors tend to repeat the mantra “show don’t tell.” It reminds us that people want to immerse themselves in the story. While reading Goodbye, Nauvoo, I was an outsider looking in. The book tells readers how each character felt, the thoughts that they had, and why. I struggled to connect to the characters because of this. A certain amount of “telling” is good, even necessary, but I prefer less than what is found in Goodbye, Nauvoo.

I believe Woodward, whether accidentally or on purpose, set the characters apart from the audience in order to stay as true to her family history as possible–something she explained in the back-matter as important to her. Readers who expect that will receive better enjoyment from the story.

While some details of the history of the Church of Jesus Christ of Latter-day Saints are given, Goodbye, Nauvoo glosses over much of it. Readers who know the history will better appreciate this book. Woodward hasn’t set out to explain all of what happened to this religious group. To cover such a great amount of history would take volumes upon volumes.

People who are not members of the Church of Jesus Christ of Latter-day Saints should still be able to understand the basics of the story. In fact, they may find themselves wanting to learn more about this rarely known tidbit of American history. Afterall, Latter-day Saints were chased from the early United States, then helped settle much of the west. But Goodbye, Nauvoo won’t provide more than a basic insight into that history.

The official blurb of Goodbye, Nauvoo

Goodbye, Nauvoo is based on the lives of three real women from a pioneer family: Martha, a young mother who wants nothing more than to see the completion of the Nauvoo temple and to keep her family together; Lydia, who doesn’t believe she could ever let herself love again after the death of her husband Danny; and Lucy, who wrestles with her own past demons as she struggles to parent her daughters. All three women learn about love, family, and forgiveness in a town they can no longer call home.

Purchase your copy of Goodbye Nauvoo on Amazon.