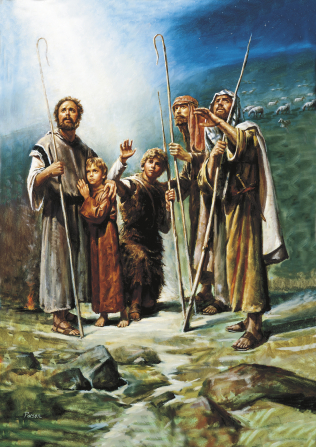 Kneeling in the garden, I gazed at the tomb, which now lay open. All that I had seen as a boy flashed within my mind, reminding me of the knowledge God had given to me and the other shepherds. I turned to my son. “Now He has risen, the boy I once saw lying in a manager.”

“Abba,” my son’s curious gaze fell upon me. “You really saw Him as a babe?”

The winds swept past our feet that night, the cool breeze causing us to build small fires. Like most nights, I stared into the flames, the warm amber tinted with reds and blues. Drawing upwards, they danced with the air currents, the dry wood popping beneath them.

“Isaac, she peeks at you again.” My father tapped my foot with his staff. “You should say hello.”

Though I refused to shift my eyes to the pretty daughter of my father’s partner, Benjamin, I couldn’t help the small upward curve of my lips. Attention from such a pretty and smart girl would make any boy’s ears tingle with excitement.

I winked at my son, who plucked a flower from the ground. Nearing the age I had been then, he too, had a young maiden who peered at him with longing in her eyes.

“Abba, the story. Speak of Liza another day.”

“But such a pretty young thing, humor me, my son. Your mother once made me pluck flowers from the ground.” I chuckled and clasped his shoulder with my hand, squeezing lightly.

I prodded the coals, forming a place for our pot to warm the evening stew. Then a warm sensation from somewhere other than the fire entered my heart. Light brighter than the flames soon surrounded us. The sheep, though usually suspicious of change in the environment, remained still. My father stood beside me. I had never seen such brightness at night, and I shielded my eyes as I searched for the source. When my gaze discovered a man dressed in white floating above the ground, I joined my father and the shepherds of the field and we stumbled backward, frightened, until the being spoke.

“Fear not: for, behold, I bring you good tidings of great joy, which shall be to all people.”

The warm sensation, which had entered my heart earlier, pushed outward, and I felt none of the coolness of the breeze, nor did fear remain within me.

The incredulous look in my son’s eye reminded me of myself before the experience that night. It reminded me of some of the looks strangers gave me when I told them my story, too.

“Son, we kneel at the edge of the tomb for one who is no longer there. Do you question my words?”

“A man floating above the ground? Was it a dream?”

He raised his hands outward and said, “For unto you is born this day in the city of David a Saviour, which is Christ the Lord.”

“Where?” my father questioned.

“How will we know Him?” Benjamin asked.

“And this shall be a sign unto you; Ye shall find the babe wrapped in swaddling clothes, lying in a manger.”

The angel who had spoken dropped his arms as hundreds more joined him.
Each heavenly host sang an anthem. The notes are a soft memory, but the words remain fully ingrained in my mind. “Glory to God in the highest, and on earth peace, good will toward men.”

“Christ the Lord, my son. We had heard the stories—read from Isaiah in the synagogues, but dare we believe? Dare we hope? The Saviour of the world. How much could He do for us? Some believed He would save us from bondage as Moses once had. But my father taught He would save us from something far greater.”

I nodded. “Our sins. Temporal and spiritual death.” I studied his eyes hoping to see understanding. “Without Jesus, we would be lost to everlasting darkness. Only He could pave our way to God. With His birth came hope.”

None of us would wait to find the Christ Child. Gathering together, the men decided to trust the flocks to the dogs. If the Son of God was born, then certainly, the Father would watch over our flocks as we went to worship at His Child’s feet.

With haste, both man and woman, boy and girl left the fields, rushing into the town of Bethlehem. Inn after inn, we searched the stables. Families, there to be counted for the tax, crowded into each dwelling, but the stables held no Christ Child.

Forlorn, I looked toward the sky. A star shone toward the earth, brighter than any I’d seen before. Following its gleaming light, I took a step forward. Then another. In our search, we’d missed perhaps the most humble dwelling of them all, a small inn, hidden in the shadows of the rock.

I heard my father’s footsteps first, then the rest as they trailed behind me. Entering the inn, I asked the question we had asked so many times before.

“Does a new child wrapped in swaddling clothes reside in your stable?”
The owner peered at me, his eyes widening in wonder as he nodded and showed us the way.

“My son, the dreary stable, carved out of rock held sheep, donkeys, cattle, and all that one usually finds in such places. As you might imagine, it was no place for a babe. But He lay there, in a stone manager, with nothing but loose linen, swaddling clothes, to keep him warm.”

“How did you know it was the Christ, Abba?”

We immediately fell to our knees as the mother and her husband welcomed us into the single corner of the stable. The Babe’s eyes fluttered opened and He studied us as we gazed at Him. The animals made no sound. And the warmth I had experienced as the angel spoke reentered my heart, telling me we had found the Christ Child. The one who would save us.

His mother was Mary, who named the child Immanuel—God is with us—Jesus. We had read Isaiah, and we knew the rumors of a Joseph who had wed an expectant woman claiming to have known no man. We could not deny what we had seen and heard in the fields. The prophesies were true. Before us, lay the child prophets had proclaimed would come.

There, in that stable, I knelt next to the same pretty, young girl my father had teased me about and gave her little thought. I only wondered at the child foretold to carry the weight of the world on His shoulders. None of us really grasped what that meant, but we knew it meant something beyond anyone’s understanding—except God’s.

As we left the stable, my heart still soared. I couldn’t stop myself from telling everyone what had happened. Those who knew me well, they listened and wondered. We watched together as the child grew. He grew as most any other child—first babbling, then forming sentences. But once taught a rule, He never, ever broke it. As perfect as I thought I was, I soon learned differently.

I chuckled as my son smirked at the thought of my perfection. We both knew better.

“I think Eema plays a part in your perfect, Abba.”

The stick I used to draw in the soil stilled, and I dropped it. Grasping my son’s hands I held them tightly. “All these years, your mother and I have watched Jesus and have seen proof of what the angel told us while in the fields. His works. The healings He performed. You witnessed five loaves of bread and two fishes feed a multitude of five-thousand people at His hand. We all listened to His words of peace and love.

“Now we kneel where His body was laid, and it is gone. Peter said He has risen.” I paused searching my son’s eyes, looking for the spark I knew he held within. “The faith and hope your mother and I discovered that night as we knelt next to a stone manager in a rock stable… I cannot question it. I’ve seen so much more. You asked if I saw Him. I did. Son, I did, and so did your mother.”

My son’s hands tightened their grip on mine. “The hope you had at His birth is fulfilled. Now we celebrate His life.”

One thought on “Hope of a Shepherd”